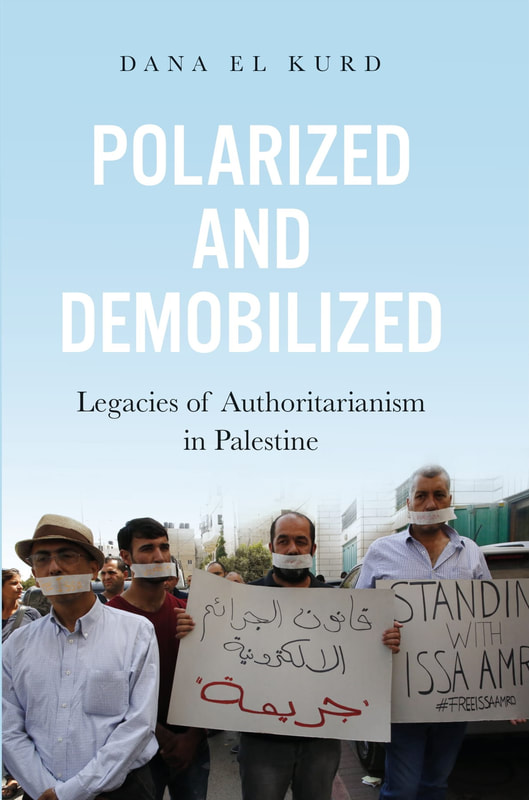 Dana's first book, titled  Polarized and Demobilized: Legacies of Authoritarianism in Palestine, has been released with Hurst Publishers and passed review with Oxford University Press. The book explores the mechanisms by which international patrons exacerbate authoritarian conditions. She argues in her work that international involvement often creates a divergence between elite and public opinion, as political leadership becomes insulated from public pressure. Such regimes gain their legitimacy from external powers, and their insulation allows them to rely increasingly on authoritarian strategies. Through the use of such strategies, particularly repression, regimes can polarize their public in a variety of ways. These strategies also have an effect on the public's level of political mobilization and engagement.  In these cases, increasing polarization and declining engagement exacerbate authoritarianism further in a self-reinforcing dynamic. Dana conceived of this topic in August 2014, defended the proposed research May 2015, and conducted fieldwork to collect data from June 2015 to June 2016.

Dana predominantly uses the case of Palestine to explore these dynamics, but also looks at cases such as Bahrain and Iraqi Kurdistan for comparative analysis. She was hosted by Birzeit University as a Visiting Scholar to conduct her fieldwork, where she utilized laboratory experiments, surveys, qualitative analysis, and statistical methods.  Data collected includes: an original nationally-representative survey of Palestinian public-opinion, over 50 interviews with decision-makers within the Palestinian Authority, activists, and political leadership, lab-in-field experiments assessing polarization and political behavior, and an original dataset (+50,000 observations) of daily political mobilization across the territories.
Powered by